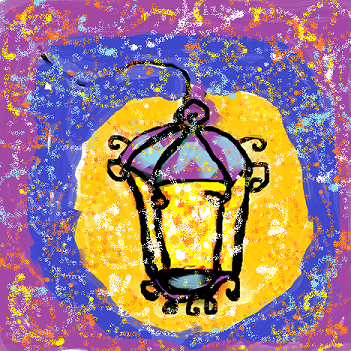 Materials for Fireflies at Midnight Lantern:

-“Fireflies at Midnight” Story Below

- A Mason jar with lid

1.  Add the battery operated lights to the Mason jar.

3.  If you would prefer to hang the jar add some wire cable to the jar.

4.  Read the story below about the “Fireflies at Midnight” to your little one to help stop nightmares and bedtime terrors.

A calming bedtime story to help stop nightmares by:

Once upon a time there lived a little boy who lived in a cozy cottage deep in the woods.

This little boy had a happy life with his family.

During the daytime he played with his

animal friends in the forest. He had dogs and cats, birds, squirrels, and mice that kept him entertained.

However, nighttime was a different story. Each evening when he got into his cozy bed he started thinking about scary things. He heard noises in the middle of the night. Sometimes, he even had nightmares and woke his parents up.

The little boy was terrified of his bedroom at night. He thought about monsters that lived in the forest. He was afraid they would come into his bedroom and gobble him up.

His parents explained to him that there were no monsters in the forest. They soothed him after his nightmares and told him how safe he was. Yet, the night terrors continued night after night. Something had to be done because no one in the house could get any sleep.

One evening before bedtime the little boy’s father took an old lantern and collected twelve fireflies from the forest.

He brought the fireflies into the little boy’s room and placed the lantern by his bed.

“Dear Child”, he said to the little boy, “Here are some new friends to look after you while you sleep.”

The father went on to explain to the little boy that the fireflies slept all day so that they could keep watch at night. They would light up the room and scare the monsters and nightmares away.

“When you wake up in the middle of the night you only need to count the fireflies’ magic lights. The magic from the fireflies’ lights will make you fall back asleep. It will protect you and keep you safe until the morning sun comes in your window.”

That night the little boy woke up when the clock struck midnight. He counted each of the fireflies’ magic light and gently fell back asleep.

The next morning when he awoke he realized he had fallen into a deep sleep with happy dreams. He had not had any nightmares about monsters during the night.