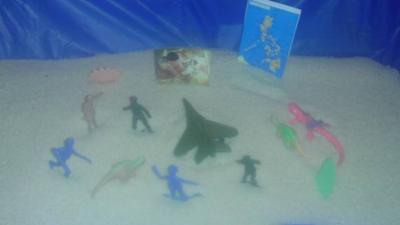 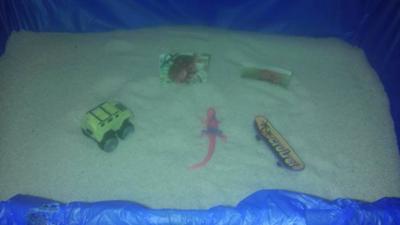 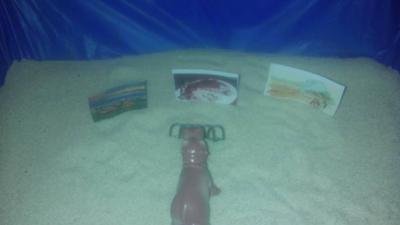 Sand Tray therapy is a therapeutic tool that can be incorporated and utilized in conjunction with talk therapy and other interventions. According to Taylor (2009), sand is recognizable regardless of age, gender, or ethnicity and utilizing sand in addition with miniatures one can move through the past, present, and future. Sand tray therapy as a whole can be effective with various types of populations.

My sand tray therapy theory seeks to address identity and feelings of disconnection from culture and family. Taking into consideration the history of the United States, the cultural makeup of this country, and the history of how various group either came or were brought into the United States, individuals may feel disconnected from their culture and family which affects their identity as a whole. Individuals may feel a lack of identity and lost and displaced within their family and as a whole from the feeling of knowing who he/she really is. It is beneficial for individuals to feel a sense of connection and a lack of connection may contribute to feelings of isolation and contribute to depression.

My sand tray theory seeks for individuals to reconnect and gain connection with their culture and gain acceptance and understanding of themselves. Feeling a sense of connection may contribute to individuals gaining a greater sense of themselves and their culture which may lead to higher esteem about the self and cultural group. Many individuals may feel invisible, endangered of being lost and insignificant as if he/she does not matter or his/her feelings are unimportant.

My theory can be applied and utilized among Filipino Americans. My sand tray theory seeks to allow clients to feel visible, special, and significant through various symbols: The Chocolate Hills and a map of the Philippines, the Philippine Flag, and other symbols. The flag has a golden yellow sun with eight primary rays, which represent the country's first group of provinces that started the 1896 Philippine Revolution against Spain; and at each vertex of the triangle is a five-pointed golden yellow star, each of which represents the country's 3 main regions - Luzon, Visayas and Mindanao (Wikipedia, 2012).

Lesson Plan #1 Gaining Visibility
The Philippines is made up of over 7000 islands and multiple cultures and languages within these islands. In the midst of coming from a land many islands, cultures, languages, and then living in the United States and being mistaken for another culture, many Filipino Americans may feel invisible and unimportant along with other feelings he/she has a result of racism and other injustices. Many clients may not feel a sense of joy for their cultural heritage and instead a sense of shame due to having a colonial mentality. This activity allows the client to discover his/her special qualities that he/she can embrace in times of feeling invisible and therefore gain visibility as well as embrace and remind the client of their own cultural strengths.
Title: I am Important and Unique
Materials: Sandtray, miniatures, cultural symbols
Directions: Ask the client to think of a time when he/she has felt invisible. Ask the client to create a sand tray using cultural symbols that speak to him /her and pick miniatures that represent him/her to represent this experience.
After the client has finished completing the sand tray, ask the client if there are any symbols/miniatures that he/she would like to remove. After the client has finished, ask the client to give an explanation of the scene. Ask the client to explain what each cultural symbols means to him/her. Then ask the client to explain the miniature he/she selected and the client’s reasoning for selecting it. The client would then be asked to explain the scene.
Extension: An extension of this lesson would be for the client to translate the cultural symbol and create a sand tray world based on the interpretation and explain it.

Lesson Plan #2 Gaining Strength
Title: I am Not Endangered
Many animal species of the Philippines are endangered such as the Philippine Eagle and Philippine Tarsier due to a variety of factors. Many Filipino Americans are losing their cultural traditions and heritage as a result of acculturation and assimilation through embracing the United States cultural traditions. As a result some Filipinos may feel some discord within themselves and within their family as a result of this loss. This lesson can create more harmony for the client who is struggling to maintain their cultural tradition while still adjusting to the United States traditions. The client can embrace both cultures.
Materials: Sand tray, miniatures, endangered species clip art miniatures
Directions: Ask the client to think of a time when he/she felt some discord as a result of trying to maintain their cultural tradition and embracing United States culture. Ask the client to select an endangered species miniature, miniatures represent that him/her and family member(s) to represent this experience and create a world in the sand tray of this experience. The client would then be asked to explain the scene.
Extension: The client would create a world of their family and feelings about the client’s emotions regarding the assimilation/acculturation and explain it.

Lesson Plan #3 My Story is My Story
Title: I Have a Story
Filipinos have a tradition that embraces folklore and storytelling. The reasoning for the existence of the Chocolate Hills involves different stories regarding why the hills exist. In this activity, a client create a story about his/her life in the United States to help the client deal with feeling disconnected from his/her culture or family. This story may allow the client to feel connected to his/her culture by allowing him/her to tell their story and embrace a cultural tradition as well.
Directions: The client would be asked to come up with a story representing current events and create this story in the sand tray. The client would be asked to include a cultural miniature representing folklore or a cultural image to include such as the Chocolate Hills. The client would also select miniatures to represent their feelings and miniatures to represent the client. The client would then be asked to explain the world that was created.
Extension: The client would create a world based on his/her favorite folklore/fable/story and have the client place himself/herself in the world and translate it.