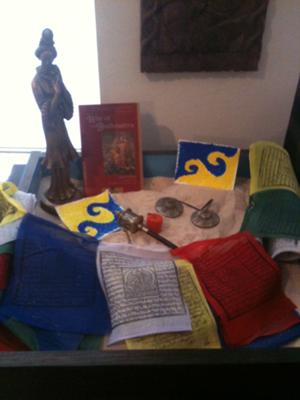 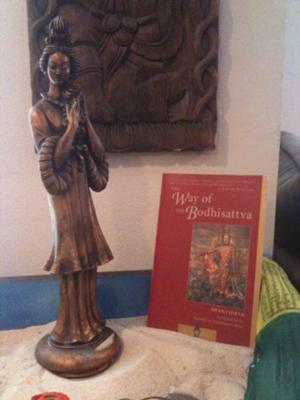 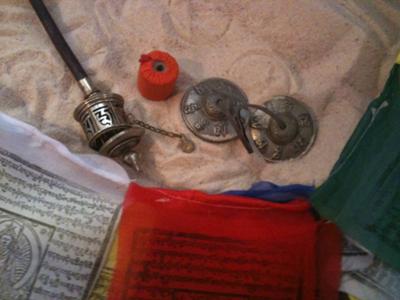 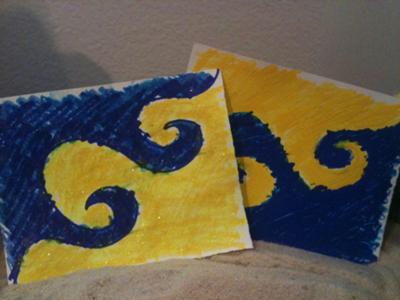 Tibet: Culture and the Multicultural Sandtray

Avalokiteśvara, the Bodhisattva of Compassion, is of extreme importance in Mahayana Buddhism. In this school, bodhisattvas represent the highest form of enlightenment as infinitely compassionate beings. Despite having attained personal nirvana, they vow to continue returning to earth in various incarnations in order to help all other sentient beings attain enlightenment and escape from samsara, the cycle of suffering all living beings experience. In this way, Avalokiteśvara represents the utmost form of compassion and greatest awareness one may experience in the human realm. This is similar to the awakening of the inner psyche and its inextricable connection to our collective unconscious. In this way, the sand tray honors the individual, collective, and interdependent consciousness.

Avalokiteśvara is said to embody the compassion of all the buddhas and is known by many names including Guanyin, Padmapani, and Lokesvara. Avalokiteśvara may refer to the holder of the lotus, lord of the world, or one who looks down as depicted in many visual representations of the bodhisattva. Just as the world of the sand tray may be understood in several ways, the translation of the bodhisattva’s name is subject to interpretation. The name’s meaning is understood only by the individual who invokes it at the time. Similarly, the world of the sand tray is truly known only by its builder.

Just as the psyche manifests in different forms in the sand tray, the bodhisattva of compassion is said to be incarnate in the Dalai Lama, Karmapa, and other revered Buddhist teachers. In the same way that a variety of miniatures are necessary to represent manifestations of the psyche, Avalokiteśvara manifests in various ways to suit the minds and needs of unique individuals. Common visual representations include male and female versions of the bodhisattva with 1,000 heads, arms, eyes, and/or hands that enable the bodhisattva to hear and respond to the needs of all sentient beings who continue to suffer. Furthermore, the individual representations or incarnations of the bodhisattva are inextricably related to the universal principles of interdependence and compassion. This can be likened to the unique miniatures and worlds created that are related to our universal, collective unconscious yet contain unique meaning for each builder.

Mantras, a common practice in Buddhism, Hinduism, Sikhism, and Jainism, are a sound, word, or group of words that have the potential to create spiritual growth, healing, and transformation. Similarly, the sand tray has enormous potential to heal the inner psyche and promote the development of self-awareness, acceptance, actualization and potential transcendence. Just as the mere experience of sand tray activities can be transformative, the sheer uttering or writing of mantras is believed to promote growth and enlightenment. In this way, practitioners are not required to have full understanding or perfect implementation at the time. Rather, the activity is healing in and of itself and may contribute to ongoing transformation and awareness.

Specifically, the mantra Om Mani Padme Hum, the mantra of compassion, is associated with the bodhisattva Avalokiteśvara. It is especially revered in Tibetan Buddhism and regularly practiced by followers of the Dalai Lama. As in the sand tray, the mantra has many layers of meaning and symbolism. Whether the mantra is spoken, written, or viewed, it may indicate the need, desire, recognition, or emergence of compassion in and around oneself, which may also be represented in the world of the sand tray. Furthermore, the mantra is commonly depicted on prayer flags, scrolls in prayer wheels, and rocks. Just as many symbols may be used to represent universal concepts and aspects of the psyche and collective unconscious, several mediums may be used to display the mantra and evoke its universal theme of compassion.

The mantra also affects one’s body, mind, and spirit, just as the sand tray touches the innermost aspects of one’s psyche and has demonstrated neurological responses. In the same way that the sand tray is related to the collective unconscious, om mani padme hum contains the entire teaching and universal principles of the dharma, thereby leading the way to enlightenment. In these ways, the sand tray and mantra both lead to transformative growth, healing, and connection with our truest, most aware, connected, and creative selves.

Just as the Dalai Lama is the leader of the Gelugpa school of Tibetan Buddhism, the Karmapa is the spiritual leader of the Kagyu school of Tibetan Buddhism. The 16th Karmapa fled Tibet due to the communist invasion mid-20th century. He later saw this flag in a dream and referred to it as the Victorious Flag of the Buddha’s Wisdom. The Karmapa noted that “Wherever this banner is flown, the Dharma will flourish.” Similarly, the sand tray allows for the inner psyche to emerge, grow, and transform so that one can reach one’s full potential, actualization, and transcendence while experiencing the continuously evolving collective unconscious.

As with the sand tray and its miniatures, the Dream Flag, has multiple layers of meaning and symbolism. The blue represents the sky, wisdom, spiritual insight and vision. This is equal to the yellow which represents the earth, compassion, and our everyday experience. The symmetry and intermingling of the blue and yellow waves indicates the two are interdependent and inseparable. It also continues the traditional union of opposites in Buddhism in which all things are believed to be interrelated and dependent upon one another. This is very similar to the Jungian emphasis on the union of opposites. Like the sand tray, the dream flag may be used to symbolize the earth, ocean, and/or sky. So like the tray and its miniatures, this cultural symbol of wisdom and compassion may be used in a variety of ways.

Rather used individually or together, these symbols reflect the centrality of compassion and awareness in the Tibetan culture. While each have some form of meaning generally understood and accepted by cultural members, the true meaning is understood only to the individual utilizing the symbol at the time. This allows the individual to create his/her meaning, build the world, and pave the path that one so chooses.