The Angry Little Gingerbread Man is a social story for kids who need help with anger management.

Great for bullying prevention too! Teach kids how to set boundaries and not allow themselves to be picked on, or bullied! 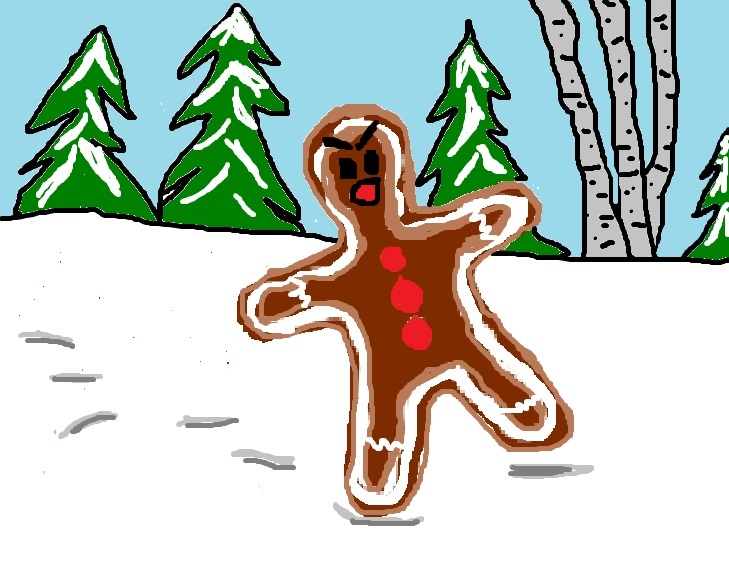 This is the story about an Angry Little Gingerbread Man. He was angry because people kept trying to take a bite out of him by saying mean and hateful things.

Each time someone said something mean the Angry Little Gingerbread Man would have a part of him break off. Of course it would grow back, but it hurt when the parts broke off. And when the parts grew back they came in crooked.

It all started with the little old lady who baked him in the oven one day. When he came out of the oven all sweet smelling and toasty warm the old lady said, “Oh, you are not perfect enough for me, for you are far too small!”

The words hurt the Little Gingerbread Man so much that his foot snapped off. He jumped out of the oven and hopped on one foot until a new foot grew back…crooked of course!

On the way out the old ladies husband yelled at him and called him “stupid” for slamming the screen door.

Again, the words hurt the Little Gingerbread Man and his arm snapped off.

He ran out of the house and into the yard. His arm grew back within a few minutes… crooked of course!

He decided to run away from the mean old lady and the mean old man. As he was running as fast as he could he passed a cow in the barnyard. The cow laughed at him and told him he looked funny running with a crooked leg and arm.

Again, this hurt the Little Gingerbread Man so much that his other leg broke off. It grew back in time for him to run…crooked of course!

Of all the body parts that snapped off this hurt the most. The Little Gingerbread Man had to sit on the fence until his head grew back…crooked of course.

As the Little Gingerbread Man sat on the fence he started to think of all the mean things the old lady, the old man, the cow, and the horse had said and done to him.

He began to get really angry because he had allowed others to hurt his feelings and break off his arms, legs, and head…crooked of course!

Just then a fox came walking down the pasture path. He saw the Little Gingerbread Man sitting all alone looking very angry.

“What is wrong Little Gingerbread Man?” he asked.

The Little Gingerbread Man was so angry and upset that he started to cry. The fox sat down beside him and waited until the last tear fell before he spoke.

“Everyone is mean to me and it hurts! Each time they are mean to me a body part breaks off. This also hurts! And then the body part grows back…crooked of course!

“Let me help you Little Gingerbread Man. Every time your arms, legs, or head breaks off it is your body’s way of telling you something. Your body wants you to protect it and take better care of it.” said Mr. Fox.

“How do I do that?” said The Angry Little Gingerbread Man.

The fox sat quietly for a few minutes and then replied, “By setting boundaries and not letting people treat you like that.”

“What is a boundary?” asked The Angry Little Gingerbread Man.

Mr. Fox went on to explain that a boundary was like an imaginary fence that you build to protect yourself. “You see, when you allow others to say mean things to you and you do not set a boundary you of course will get mad at them.

But, do you also know who you really get mad at when others say mean things to you? You get mad at yourself more than the people being mean to you.

This is because you are angry that you are not setting the proper boundaries to protect yourself.” said Mr. Fox.

“But I ran away from them!” said The Angry Little Gingerbread Man.

“Running away is not always the best way to stop people from being mean to you. That is only what you should do in an emergency or an unsafe situation.” declared Mr. Fox.

“What should I have done then? Should I have said something mean back to them? Hit or kicked them?” said The Angry Little Gingerbread Man.

“Of course you should never be mean, hit, or hurt someone back.” said Mr. Fox.  “What you should do is outsmart them! Let me show you a list of things I do to outsmart others who are mean to me”.

Mr. Fox showed the Angry Little Gingerbread Man his secret list of ways he outsmarts others who are mean to him.

The Angry Little Gingerbread Man felt better talking to Mr. Fox and decided to try some ways to outsmart the old lady, the old man, the cow, and the horse. He thanked Mr. Fox and took the list he had given him.

But then he found the courage to outsmart the horse and set a boundary with him. “You know” said the Angry Little Gingerbread man “There are better ways to shine than that!”

The horse stopped laughing and quietly walked away. He knew he had been outsmarted and that the Angry Little Gingerbread Man was no longer going to take his bullying.

Then something wonderful began to happen to the Angry Little Gingerbread Man. He started to feel a little less angry. He decided he needed to go back to the barnyard and then to the house and set some boundaries with the old lady, the old man, and the cow.

His anger began to melt as he spoke up for himself and set boundaries with those who had been mean to him.